Mavra first appeared in the casefiles during the
events of the Grave Peril case, working with
Bianca St. Claire and Leonid Kravos to stir up
trouble for both Harry Dresden and Michael
Carpenter. And, as an old and powerful Black
Court vampire, she can stir up a lot of trouble.
She hates Michael for destroying her “children”
and “grandchildren” over 20 years ago, so
she planned to use the blood of an innocent
(Lydia) to unmake his Sword Amoracchius.
Thwarted in this, she disappeared for a time.
She popped up again in the Blood Rites
case, creating Renfields (page 84) in a homeless
shelter. She was taken down by the efforts of
Harry, Kincaid, Karrin Murphy, and Ebenezar
McCoy.
During the events of the Dead Beat case,
she showed up again, forcing Harry to find The
Word of Kemmler for her, under threat of
sending blackmail photos of Murphy—taken
while Murphy was working on the Blood
Rites case—to the authorities. When Harry
provided the book, he threatened her, and she
initially laughed it off—until Harry outlined the
lengths he’d go to just to get her, if she persisted.
In addition to the vast Black Court vampire
powers she has, Mavra seems to be skilled in
magic. She is ridiculously adept at using Veils
and is responsible for the “barbed wire” spells
that afflicted Agatha Hagglethorn and Micky
Malone. Furthermore, her command of mind
magic is extensive.
Mavra is slender and pallid, with blue lips
and hair like dried straw and bread mold. She
looks exactly the same to the Sight as she does
to normal vision. 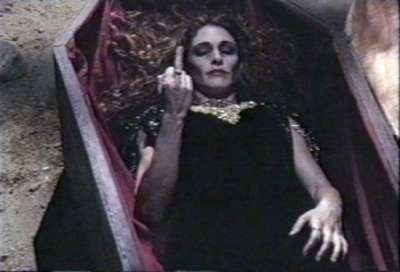