Scott Timore (accent on the e)

Background: How Sharper than a Serpent’s Tooth
Grew up in California to an affluent family. Mommy and Daddy dearest were absentee parents always hinting at joining “the family business”.

Rising Conflict: There is Nothing to Fear but Fear Himself
So I was on a date with this totally badass chick from my school. Things were getting pretty serious in my car and I was just starting to make my move when I knocked over one of our drinks, spilling it all over her. I was being such a spaz and she freaked out on me about how I ruined her shirt. I tried to fix it, but then she started yelling at me and it got to be too much. Then she REALLY freaked, and I don’t mean “omg I broke a nail”, I mean sheet white face, tears, and whimpering. At first I looked behind me, to see what caused that, but then as I saw my reflection in the window, I realized…..it was me. After that, a lot of things I overheard my family say when they thought I wasn’t around made sense, and the horizon looked like a damn good target to aim for. You would think the worst part of the story is that a girl I was completely digging looked at me like I was friggen Frankenstein, but the twisted thing is I kind of liked it.

The Story: Angry Orphan
Having just gotten to ole NY, I decided to go sight seeing. First on the agenda was the great phallic facade itself, the Empire State Building. It was during my touristic moment that I saw a real twisted dude staring at me all invasion of the body snatchers like. Something about this guy reminded me of an overheard convo back home. They were talking about a guy named Renfield and the blacks. At the time I just thought my folks were being racist but boy was I wrong. The nutzo then comes barreling at me, so I book it. While running for my life, this geeky dude grabs me and pushes me towards the bathroom. Genius move right? When pursued why not go to a dead end? But then the guy wiggles his fingers and shit, and the hydrant bursts sending freakazoid flying. Just when I am about to thank my knight in bespectacled armor, I see this chick near by looking like she is gonna pop a gasket. I’m guessing her and water don’t mix cause next thing she does is yank a curling iron outta her bag, and tosses it in the water. When the shock hit the dude, I swear i never knew the human body could twist and contort like that, but seeing my chance i bolted to the first subway I saw and was outta there. Guess it was for the best cause I ended up at Coney Island where I met Cy.

Guest Star: Once Burned, Twice Mobbed
So I thought I had left the craziness behind me, but it seems to find me anywhere I go. I saw this guy talking to the pissed off chick and something he said must have set her off. She goes and grabs a brick first thing and hurls it though a blocked window. If that wasn’t enough, suddenly fire bursts up, and I hear this freak as hell screaming. I move towards thinking some innocent people got caught in a fire when I see this freakish bat monster running around on fire like a chicken with its head cut off. I remember Cy telling me about these types, I think they are the Red Court. Great first Black Court, now Red, what next? Fuchsia Court? Naturally I think they want my neck like the Black Court so I freak…which of course is the worst thing I could do because now everyone else around me starts freaking out. I nearly lose myself to a sudden burst of adrenaline that I am learning is linked to making people pee themselves, so I jet before it gets worse.

Guest Star: Fuck Authority!…..From Far Far Away…..
I can’t believe my credit cards are canceled! I never had this problem before. I just flash the family plastic and everyone would treat me like royalty. The dude actually took it and cut it up! Then he starts talking about a thing called a credit limit. We got into a whole fight, and so sure he was wrong, I just took it and walked away thinking that was that. But then the guy yells for security on me. Seriously what the hell? So I do what it seems like all I have been doing since I got to NY, I ran. While fleeing I ran into angry chick again, who turns out was shoplifting jewelry. The security guard instead caught her and I made it to the street. I felt bad, but she probably wouldn’t be the type to hold a grudge…..right?

Scott Timore (accent on the e) 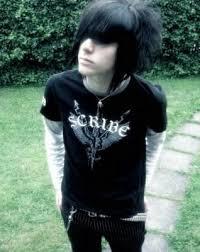