*Rotes
Don’t have yet

Background: troubled parental relationship
Raised by his parents (still living) on the upper west side. They didn’t get his fascination with bugs. Went to Bronx science where he formed a close relationship with his biology teacher, who began to teach him about magic. Parents thought they were lovers and pulled him out of school

Rising Conflict: Be a buddy, not a bully
Leaving science, he went to public school. Most of the other students were bullies. He had one or two friends but most of his classmates were jealous of him. His projects in science classes were constantly sabotaged so he decided to teach the main offender a lesson. When in the showers after gym class, he caused the bully to nearly drown with the budding magic his teacher had taught him, but freaked out and let the bully go.

The Story: Curiosity Killed the Cat
Working for the DOH, he was sent to investigate complaints about an explosion in the population of cockroaches on a block on the UES. He found that a summer fae was intentionally breeding and releasing them into the neighborhood.

First assist
The shoe gum detective agency was simultaneously investigating the summer fae, and upon stumbling across the cockroach next, comfort tried to help by releasing a chemical that made everyone in the area faint.

Second assist
Walker Boh was on the case, shrunk down to tiny and valiantly fought the sleeping roaches.

Guest Star: You’re all wet
Zack grabbed Scott and pushed him into a bathroom. He then cause a hydrant to burst from the pressure onto the Renfield.

Guest Star Redux: Destructive personality
Seeing a number of panicked people rushing towards Comfort, Zack had only a moment to disintegrate the asphalt between them, causing the people to veer away from her. 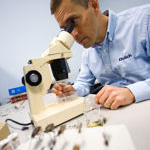